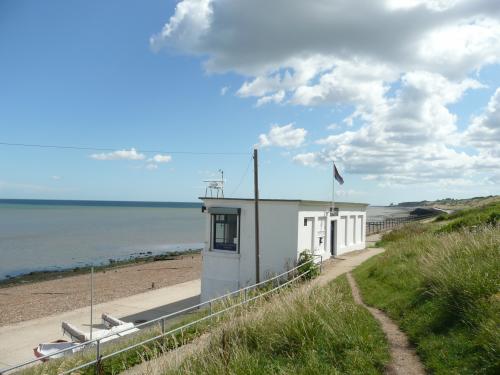 The idea of a local NCI station was mooted in 1998 and it was hoped to use the coastguard lookout at Bishopstone. Unfortunately Canterbury City Council demolished the building in 1999.

NCI Herne Bay was founded using a local shop selling second hand furniture in order to raise funds by donations and subscriptions. Soon after the council allowed the use cupola above the bandstand but this proved to be not very satisfactory.

In October 2000 the NCI moved to the our current premises which is the top floor of a Victorian public toilet block known then and now as the OLD BATHING STATION. It had been used as a cafe as well as storage so had electricity and running water which was a start. Members of Herne Bay NCI started a massive cleanup. By 2001 a telephone line was installed and NCI Herne Bay was up and running with watches and training. A toilet and kitchen were later installed along with double glazing.

The building was sold in 2005 by Canterbury City Council and ever since we have had a lease agreement with the current owners.

In 2010 we were awarded DFS (Declared Facility Status) which is a requirement to meet the local search and rescue standards and we are assessed annually to ensure we maintain that standard. This assessment normally involves a NCI recognised assessor to observe our working practices and sometimes involves Whitstable lifeboat to be launched in order to carry out various exercises with us.

We have been  recently been invited to man a stand at a local Search and Rescue awareness exhibition in Herne Bay and also a similar event at Westwood Cross Fire and Rescue centre. Both events allowed us to make ourselves known to other participating organisation such RNLI, Police (marine division) Fire and Rescue etc. This all helps to raise awareness of our organisation.

The inside was given a major paint up inside in September 2014 and also included new carpet throughout.

The station is situated 20 ft above sea level and has a 180 degree visual area covering from Herne Bay Neptunes Arm round to Reculver Towers. We have a watchroom with radar , AIS and Radios, Training area with charts and PC training programs, Kitchen with seating area and toilet.