Nells Point coast Watch station,The first NCI Station established on the Welsh coast,Is built on the site of a derelict Coast Guard station. With funding from the Welsh Assembly Government and the Vale of Glamorgan Council it was rebuilt to a very high standard.

From the watch tower we have views of the Somerset coast line from Weston Super Mare in the east, the islands of Flat Holm and Steep Holm; and down to Foreland Point on the Devon coast in the west. On the Welsh side we have a good view of Sully Bay and Sully Island (and causeway) in the east and Friars Point down to Rhoose Point in the west

With numerous yacht clubs, charter fishing boats, and beaches either side of the station,Watchkeepers are kept very busy, especially during the summer months.

The Bristol Channel  has the second highest tidal range in the world, second only to the Bay of Fundy in Canada, and can reachin excess of 15 metres. 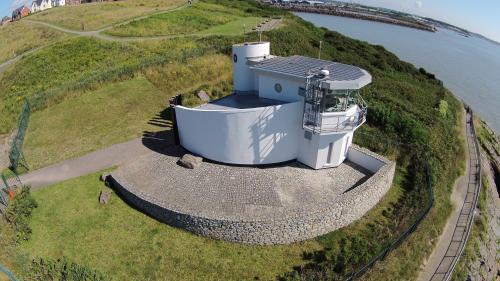 A View from the Air (with thanks to Christopher Thomas)