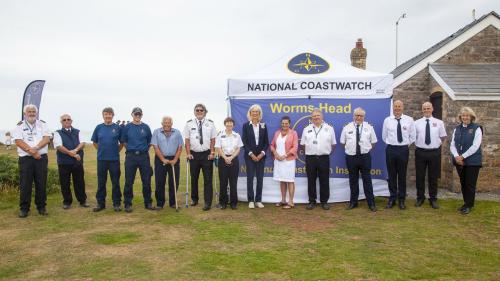 24th July 2021. NCI Worms Head  held a Station Open Day to celebrate their fifteenth anniversary as an operational National Coastwatch Station. Apart from many visitors local to the area, the station was pleased to welcome many holidaymakers staying in Gower or in South Wales who found time to call in and visit the station.

As part of the anniversary, the station unveiled a commemorative plaque to Alan Richards who was one of their original watchkeepers, before becoming Worm's Head Station Manager (2008-2011) and went on to become NCI National Chairman (2011-2016). The Open Day was exactly one year after he passed away, at a time when restrictions prevented a larger gathering or event to say farewell. The unveiling was carried out by Teri Richards, Alan's widow and Lesley Suddes the former NCI National Chairman who took over the role from Alan in 2016.

During the time the station has been open a number of our current watchkeepers have maintained regular volunteering duties throughout and Long Service awards were made. Presentations by Mrs Louise Fleet JP, Her Majesty’s Lord-Lieutenant of West Glamorgan, NCI Trustees and National Support Officers were received by the members and guests who included Councillor Richard Lewis, Station Managers from neighbouring NCI teams at Porthcawl, St Donat's Bay, Nell's Point and Wooltack Point and representatives of Rhossili Coastguard, Oxwich Coastguard and Loughor Rescue. As the day came to an end the station  received a flypast from Coastguard Rescue 187 helicopter which entertained the crowd by circling the lookout a number of times and finally waving goodbye and wishing the station a Happy Birthday on VHF Ch.65 as they left.

In March 2005 NCI was told that there was a possibility that the old coastguard station at Worm's Head would be available to lease from the National Trust. Knowing that the Gower Peninsula has a very beautiful, but also very dangerous coastline, they proposed to establish a new lookout and the NT made it clear that they would be happy to see NCI use the building in something approaching its original role. Worm's Head NCI, with 19 volunteers, had a 'Look Out' which showed all the signs of having been unoccupied for some considerable time. It had no running water, no electricity, no telephone, no heating and as if all that is not enough, no toilet. All of this was a one mile walk from the car park at Rhossili. The saving grace was that the views were, and are, fantastic. Worm's Head itself is accessible by a causeway 2 1/2 hours either side of low tide. At other times the causeway is flooded and Worm's Head becomes an island. Stranding or potential stranding incidents are dealt with on a regular basis.