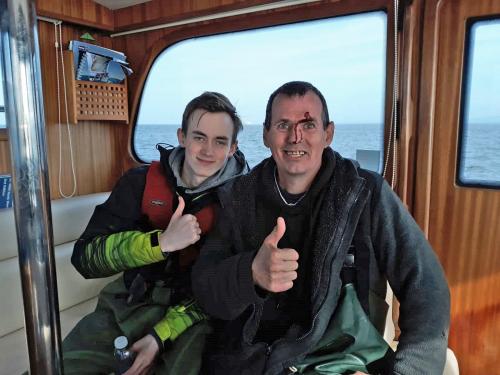 28th February 2019. Two men in a small rubber dinghy were plucked to safety off Fleetwood by a motor cruiser after a fishing trip went wrong leading to the emergency services to issue a warning to anyone considering even a short journey out to sea.

A father and son had decided to go fishing off the coast and set off from Cleveleys beach in their craft, no more than six feet long. But when the vessel neared the King’s Scar sandbank, the anchor rope caught in the engine, stopping the motor. When the men decided to cut the rope, the situation became worse as they started to drift out to sea. With no power, radio or even a mobile phone and a small, low-lying vessel which could not easily be seen, the situation was becoming desperate. However, they were spotted by the keen eyes of the volunteer watchkeepers at the National Coastwatch station at Rossall Point. By a fortunate coincidence, the Rossall Point station secretary and motor boat owner David Croall just happened to be in the right place at the right time.

Rossall Point National Coastwatch spokesman Stuart McGregor said: “These two men really had a lucky break and should not have even attempted to go out in a small rubber dinghy like that. They did not have any means of communication on them and when they got into difficulties, their situation became perilous. If they hadn’t been spotted when they were, it could have been a potentially life-threatening situation. The drama began when a Coastwatch volunteer spotted with his binoculars what appeared to be someone waving in the water, about two and a half miles out to sea. When David contacted them for a radio check before taking a short trip in his boat, they knew he was close by and asked him to take a look”.

Meanwhile, the emergency services were informed and HM Coastguard radioed David to check out the situation while they alerted Fleetwood Lifeboat. It was pure coincidence that 64 year old David, from Lytham, had decided to take his 30 foot motor cruiser Island Spirit out for a short spin. The experienced boatman, who is also a member of NCI Rossall Point, said: “I had just contacted the National Coastwatch lookout for a routine radio check, to make sure my radio was working and to gauge the weather conditions. A couple of minutes later they phoned me back and asked me to take a look at something they’d spotted. I saw a tiny dot in the distance but when I got close I could see this little dinghy. The teenage boy was white as a sheet and his dad was soaking wet and had a gash to his head - he’s been trying to pull the boat to shore and had hurt himself”. David added “Trying to get someone onto a boat from the sea is not easy because boats are quite high in the water, but by luck my boat has a low-lying bathing platform and they were able to clamber aboard. They were very happy to see me. Once I’d got them I felt a warm glow of relief but before that I was very worried, to be honest. I took them back to the marina and the Coastguard shore lads checked them out.” Stuart also said: “We would just reiterate the message that if people do go out on a fishing trip, it would be a good idea to contact ourselves or the Coastguards and check on the weather conditions and always have life jackets and some means of communication in case you have problems. This situation could have had a less fortunate outcome.”.

NCI Rossall Point received a donation and a message of thanks which included the following: "You saved my partner and my boy yesterday at Cleveleys, when everything that could go wrong did go wrong. They are aching and bruised, but home thanks to you. Without people doing what you do I don't know what would have happened. Thank you so much."