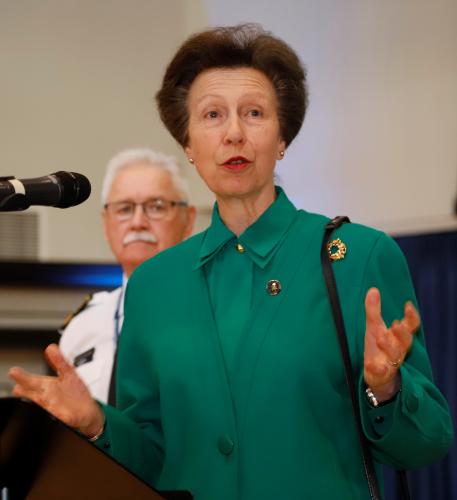 30th October 2019. A very special Station Managers meeting took place at the Victory Services Club in London, when our Royal patron, HRH The Princess Royal kindly accepted an invitation to join us and meet the volunteer Station Managers of the National Coastwatch Institution.

The Station representatives had been grouped together into geographical areas with their Liaison Trustee. The Princess Royal visited each group where she met each member before being given a short introduction of their region and discussing their operations. Finally, she met the members of the Operations Support Group before Lesley Suddes welcomed her on behalf of the members and invited her to say a few words. Her Royal Highness expressed her pleasure at meeting so many of the station representatives from around the country and said that she found the group presentations interesting and informative. She then said that in her view, meetings like this were a very valuable way of sharing information, discussing best practice and equipment – including which kettles make the best tea at the watch. Her Royal Highness concluded by thanking everyone present for all their hard work which is what makes the charity the success it is today.

After lunch, the meeting was addressed by Sir Christopher Coville where he praised the actions of the volunteers of the NCI. He ended by saying “When people ask me what the NCI does, I tell them that they do three things. They save lives, they enrich lives and they add resilience to their communities as part of the search and rescue community. Thank you as a member of the public. Thank you for what you do on a day to day basis.”.

Lesley Suddes thanked the assembled members for their hard work throughout the year before introducing National Treasurer Steve Ashby who presented the Treasury report and a brief outline of the upcoming financial model that will be introduced next year. Ian Weston (Head of Operations) then introduced a discussion on operational issues and matters arising from the small group meetings before throwing the meeting open for members to raise other issues.