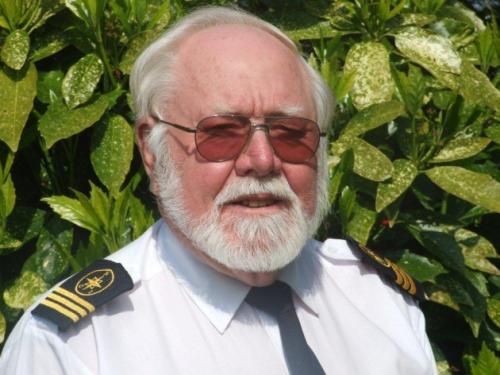 It is with great sadness that we announce that our great friend Alan Richards passed away on Friday.  As many of you will know, Alan was one of the founders of NCI Worms Head, then Station Manager; he later joined the national team on the Advisory Board, became a Trustee and served as NCI Chairman for five years Alan had been poorly for a while but had rallied and was home from hospital for a few weeks.  Unfortunately, he suffered a relapse and slipped away peacefully - still at home as he preferred.  Alan had NCI in his blood, he was an astute, unflappable leader and an excellent ambassador for the Charity.  We will miss him very much.

Alan was a hugely active and influential member of NCI throughout his time with the Charity, beginning as a watchkeeper at NCI Worms Head, quickly progressing to management roles locally then nationally, culminating in his leading the whole Charity as Chairman during a critical stage of its development between 2011 and 2016.

His introduction to the Institution was in 2006. Driving to his initial meeting to discuss the setting up of the new station at Worms Head he had decided not to get overly involved. He had retired from a successful career with Royal Mail and was looking for a new but not compelling interest. By the end of the evening he was installed as Station Manager.

Together with Dai Morgan, the initiator of the Worms Head project, Alan was faced with the task of renovating the old Coastguard Lookout at Worms Head and the moulding of a competent team of watchkeepers to man it. The Lookout’s assets were a stunning view of the tidal island - the reason for the new station - and a landline phone. Everything else had to be provided, from the refurbishment of the old building to obtaining the necessary watchkeeping equipment. And the watchkeepers – volunteers from all different careers and backgrounds from farmers to seafarers - had to be trained to the exacting standards required by NCI. Over the winter everything got done. The first watches were held over Easter 2007 and the station was opened officially by the Lord Lieutenant the following June. Alan continued to direct and support the local station during its eventful first five years before moving up to the national team, from there on to become National Chairman.

During his time as Chairman, Alan devoted thousands of hours and untold energy to the voluntary but undoubtedly full-time role of leading and managing the Charity. Highly professional and with great experience ‘at the sharp end’ of NCI, Alan’s knowledge and supportive approach, endeared him to the membership. He impressed and inspired watchkeepers by his dedication to the purposes of NCI and his unstinting support for the all-volunteer workforce. He took every opportunity to visit stations, meet volunteers and ensure recognition for their time and commitment. In so doing he travelled the length and breadth of the country spending time at every station in the course of his Chairmanship.

Alan oversaw significant expansion of the Charity to some 50 individual lookouts with over 2000 volunteers around the coastline of England and Wales, adding ‘eyes’ to watch potentially hazardous areas of coastline. Operationally, Alan personally led a raft of initiatives to enhance the operational capability of NCI including promotion of Declared Facility Standards through the organisation, acquisition of a dedicated NCI VHF radio channel - 65 and establishment of NCI as an RYA training school to deliver VHF radio qualifications to watchkeepers.

At the same time, Alan introduced structural, cultural and financial change to the Charity improving administrative standards by establishing a new, efficient national office, developing the cohesion of geographically dispersed stations, and streamlining the Charity’s financial model. He also strongly promoted the profile of the Charity with a wide range of external stakeholders including MCA, RNLI, and other maritime bodies to achieve widespread support as well as significant financial sponsorship. During Alan’s tenure, NCI was awarded the Royal Cruising Club's prestigious Medal for Services to Cruising in recognition of their contribution to sea safety, and in 2016 received an award for excellence from British Marine as their Charity of the Year.

The challenges involved in these activities cannot be overstated, but Alan’s vision, enthusiasm and sheer tenacity enabled NCI to become firmly established as a well-recognised, highly respected part of the Search and Rescue organisation.

Alan stepped down as NCI Chairman in 2016 at the age of 81 but continued to keep watch at Worms Head and assist with national projects.

Alan was a gentleman who had NCI at his heart and made an outstanding contribution to the Charity. He will be greatly missed and remembered with true fondness and respect.