On the night of 11th January 1851 the 250 ton Brig New Commercial was making from Liverpool to Jamaica when it was caught in a violent storm and driven in thick fog onto the Brisons, a rocky formation lying off Cape Cornwall. The vessel struck on the ledge connecting Great and Little Brisons and broke up almost immediately. The crew of nine and the Masters wife reached a ledge where they were finally spotted at daybreak. However the sea was too rough to render assistance. At about nine o’clock the survivors were seen to be swept from the ledge by a huge wave and only three survived. One of the survivors, Isaac Williams, managed to get on a floating spar, and, using a plank for a paddle and a piece of canvas for a sail he managed, with the help of the tide, to get clear of the Brisons and navigate to Whitesand Bay. Local fishermen who bravely launched their boat through the breakers rescued him, after several hours. Meanwhile Captain Sanderson and his wife Mary were washed on to Little Brison where they clung perilously to safety.

The inspecting Commander of Coastguard at Penzance ordered the revenue cruiser Sylvia to round Lands End to attempt a rescue. After working her way through the heavy seas around Longships, the Sylvia finally drew level with the Cape and launched a boat with four men who tried to get near to the rock. This proved hopeless due to the weather and the boat finally returned to the Sylvia with great difficulty. Darkness was falling, preventing any further attempts at rescue, leaving Captain Sanderson and his wife Mary marooned on the rock for another night.

The following morning the wind started to ease a little and at about one o’clock, four boats set off from Sennen to approach the Brisons. They were joined by a boat from Pendeen manned by four preventive men and a miner, as well as the boat from the Sylvia. A huge crowd of people who had gathered on the cliffs to watch the proceedings cheered these six rescue boats on. The sea, however, was still running too high for anyone to get near the Brisons. 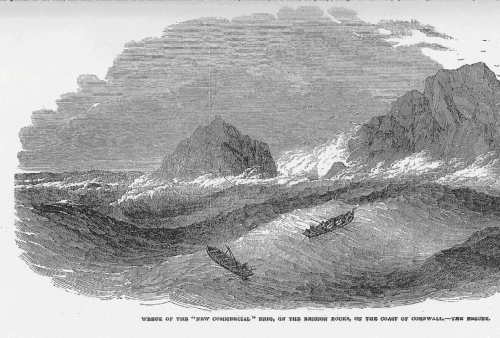 Captain Davies, the Coastguard, had brought with him several nine-pound Dennett rockets, despite never having the opportunity to test them at sea or even on land. He put his crew into one of the Sennen boats before firing the first rocket. As he fired he was enveloped in flames from the rocket but suffered no injury. However this line fell on a sharp ledge and was cut. A second line fell close to the survivors and was quickly seized by Captain Sanderson. He was seen to fasten the line around Mary’s waist and urge her, still clad only in her light nightdress, to jump into the sea. At this point three enormous waves broke in rapid succession nearly sweeping away the Sandersons and the rescue boats but the waves passed leaving everyone unscathed. Mary Sanderson was pulled through the water and into one of the rescue boats, but the extreme conditions had taken their toll and before the boat could reach the shore Mary succumbed to exhaustion and exposure and died. Her husband Samuel was pulled to another boat and landed at Sennen later in the day.

Mary was buried in Sennen churchyard on 19th January 1851. She was thirty-four. As a result of this rescue, the National Shipwreck Institution (later to be known as the RNLI) awarded Gold and Silver medals to many of the people involved and announced that a lifeboat was available for despatch to Sennen in acknowledgement of the “..gallant conduct of Coastguards and fishermen of that place..” This lifeboat arrived in 1853 – the first in a long line of lifeboats deployed at Sennen. The Brisons today - in calmer weather

In 2010, NCI Cape Cornwall was awarded the Queens Award for Voluntary Service, and it was decided that a fitting way to celebrate the award should be found.  Mary Sanderson was buried in Sennen churchyard, far from her home city of Newcastle and over the years, her grave had become dilapidated and overgrown. NCI Cape Cornwall, whose Station looks out over the Brisons, adopted her grave and, with the help of local businesses, laid a new gravestone and agreed to care for the grave in perpetuity. In 2011, on the 160th anniversary of her burial on 19th January 1851, a short and poignant rededication service took place at Sennen Parish Church near Lands End to commemorate her life as a symbolic gesture for those who have died and those that help to preserve life along our coastline. Her new gravestone reads:

Sacred to the Memory of MARY

Of the Late Revd. Tho. Wood am

Of Newcastle upon Tyne

While Being Drawn Through

“In the midst of life we are in Death”

The 160th Anniversary of the

This Stone was Renewed by

Whose Station Above The Brisons

Watches Over These perilous Seas.