Jack Sound is the narrow rock-strewn stretch of water, approximately 500 metres wide, that separates mainland Pembrokeshire from Skomer and its adjacent islands.  The Sound is relatively shallow and a ferocious tidal race forms at most states of the tide, sometimes reaching 8 knots.  Slack water persists for about 30 minutes on neap tides and less on springs.

For a number of years now, we have enjoyed wonderful holidays in Pembrokeshire (South Wales) with a group of good friends, children, dogs, boats, kayaks and various other toys.  Each year we would walk up to Wooltack Point at the end of the Marloes Peninsular and gaze across Jack Sound to Midland Isle, Skomer and beyond, saying to each other: "one day, we're going to sail through there!".  Each winter, our plan to sail through Jack Sound would become more refined and our determination stronger.

This year the camping was wild and windy and we felt our holiday fortnight ebbing away with the prospect  of 'doing' Jack Sound eluding us once more.  Then on the last possible day, the gods smiled on us and the wind somewhat abated.  Rapidly 'the plan' was dusted off and furtive preparations were made.  This was to be a 5-man attempt on Jack Sound with Tony in his Seal 22 "Harmony" with Guy and Charlie, together with Phil and I in my Drascombe Longboat, "Rainbow Aileen".

The intention was to head down to Dale, mid-afternoon, get everything onboard the boats, have a quick bite to eat in "The Griffin", then sleep on board, ready for an early start next morning.  At 23:30 we were still in the pub (though we had been careful not to imbibe too heavily)!  We had met the local Coastguard and told him of our intentions.  His words were: "I admire your Corinthian spirit but am glad that I'm not on duty in the morning."  This did give us a good opportunity to have our passage plan carefully scrutinised by someone with excellent local knowledge.

So, we finally left the pub (with the Coastguard's blessing) and set out in the dark for the outer pontoon in the middle of Dale Bay, to which we moored for the night.

All too soon it was morning and getting underway seemed to take forever.  Once breakfast was finished, we gingerly called-up Milford Haven Coast Guard and told them what we about to do.  We then nosed out in a gentle breeze, which soon built into a south south-westerly Force 4 as we got out into the Heads of the Haven. 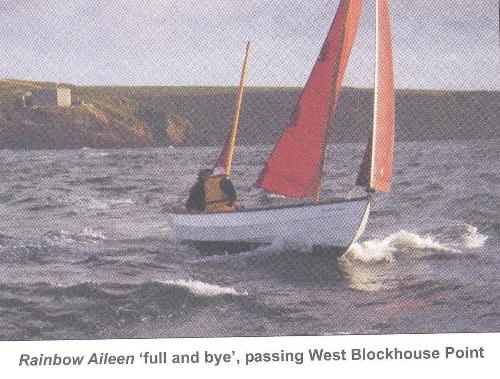 There was quite a heavy south-westerly swell running after several days of "lively" weather.  Thus we initially had a very uncomfortable beat into steep, sloppy seas and all started to question whether we were doing the right thing.  Once we rounded St Ann's Head we were able to bear away onto a splendid broad reach and head straight towards our Holy Grail.  Suddenly, we were screaming along under full sail with a clear, bright sky and could see Jack Sound in the distance.  Our timing was good and we were right on target to arrive on the last of the northward flow, two and a half hours after local high water.

Sailing through Jack Sound itself was rather uncomfortable.  It was almost a dead run - Rainbow Aileen's worst point of sail.  We watched the heavy swell riding up and down the rock outcrops that the Pilot told us to stay in-between; slowly and somewhat nervously we eased through.  The joy as we reached St Bride's Bay was tremendous.  We were then able to come round onto a beam reach and sail quite close along the majestic north coast of Skomer Island in relatively sheltered seas and enjoy sandwiches and hot soup.  Once we reached the western end of Skomer, we again had to punch into the rolling swell.  Soon, we were able to tack and fly back between Skomer and its southerly sister, Skokholm.  This was the most exhilarating leg of the voyage.  It was still blowing a good Force4, with big seas and bright sunshine and that glowing feeling that we were heading back having achieved our long-held ambition. 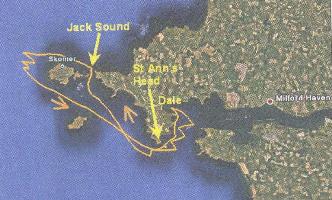 All too soon we were passing round St Ann's Head and back into the Haven and our adventure was complete.  As we secured to our mooring in Dale Bay, my hand-held GPS informed me that our round trip had covered 31 miles at an average speed (over ground) of just 5 knots.  We called up Milford Haven CG to notify them of our safe return, then headed back to the Griffin for a celebratory pint.  What a cracking day!!

I'm sure that Rainbow Aileen is not the first Drascombe to have sailed through Jack Sound and some of you might wonder what all the fuss is about.  Well, for Tony, Guy, Charlie, Phil and I (The Jack Sound Five!), it was a mighty fine day and one that we will long remember.

Rainbow Aileen sailed magnificently in the sometimes challenging conditions that we encountered on the trip.

Many thanks to Robin  for permission to reproduce it here. 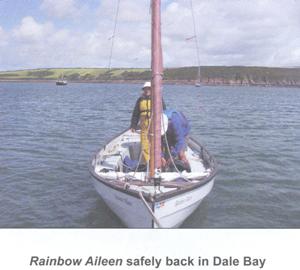