History and Origin of NCI Skegness

NCI Skegness originally commenced in March 2004, when a ten-year lease was taken on the former Lifeguard station at Ingoldmells Point. After refurbishment, funded solely by generous public donation from the residents of and visitors to Ingoldmells, the station became operational 7 days a week throughout the year. It was credited with active involvement in potentially saving no less than 23 lives in that year alone.

Since it commenced regular operations in March 2005, fully trained watchkeepers had kept visual watches on the three miles of shoreline, beach and promenade between Chapel St Leonards Point and Butlin's Holiday Camp foreshore.

Unfortunately, in June 2008, the land owners requested National Coastwatch to cease operations as the building was deemed unsafe.

Recognising the value of the public safety service on the coast, East Lindsey District Council immediately granted a lease on the old Coastguard tower at Winthorpe, near Skegness.

Coastwatch operations continued successfully there, since its inauguration in May 2008, and the station has dealt with over 100 reportable incidents up to September 2011.  All manner of marine emergencies have been reported including, alerting the coastguard to inflatable beach dinghies and ‘Lilo airbeds' blowing out to sea, swimmers in difficulty, jet skis capsized, vessels in distress and many other similar incidents.

Lost and found children are a significant task during the summer months, together with the summoning of ambulances for injured persons. Aside from observing and reporting potentially vulnerable persons to HM Coastguard, other occurrences dealt with included, stranded seals and injured birds rescued from the beach, which are reported to animal welfare organisations.

However, in February 2014, the station had to vacate the premises when the District Council sold the freehold to a private buyer who set about converting the premises to a pub and reataurant. During this refurbishment it became operationally impossible for NCI to continue providing visual surveillance services from this location.

We were however able to maintain a visual watch by the use of a mobile watchstation trailer supplied by the Seafarers Association.

The Coal Industry Social and Welfare Organisation, (CISWO)  the owners of the Miners’ Retreat Hotel allowed us to park the trailer in the grounds of the hotel. We are grateful to them.

During the following three years other locations were investigated but alas all of these fell through. Eventually were were granted a 5 year lease with CISWO to enable us to obtain Planning permission for a demountable purpose built Station in the grounds of the Miners Retreat. This was sited on 20th February 2017 and the equipment was transferred on 22nd February 2017 and the Station recommenced operations on 23rd February. 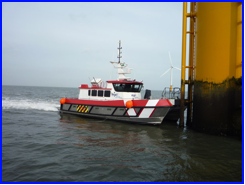 Our panorama extends from one mile north at Jackson's Corner, to two miles south at Skegness South beach - a very busy surveillance area which includes much commercial fishing and the Lynn, Inner Dowsing and Lincs wind turbine fields, at 3.1 to 5.5 nautical miles offshore. We have much maritime work traffic transitting the area to observe and log on a daily basis

We are always on the lookout for volunteers, both men and women of any age with reasonable mobility. No experience is necessary as you will receive tuition at your own learning pace, for very rewarding and worthwhile professionally-based activity. You will have the chance to meet like-minded people and be serving your community in a positive way. You will be made most welcome.