Gwennap Head or Tol Pedn ( its original Cornish name) as it was known until 1977 is located high on the far south west of Cornwall between Land`s End and Porthcurno. Tol Pedn Penwith (the Holed headland in Penwith) draws its name from a chasm called the Funnel. The name of Gwennap Head probably comes from a family in one of the adjacent parishes as there are records of families with the surname Gwennape. They must have taken the surname from the parish of Gwennap originally and recent research by Craig Weatherall states that this change occured around 1977. Local people still refer to the headland as Tol Pedn.

Gwennap has always been a place to look out for on the ships that pass this stormy corner of Britain. There is a reference to a cliff castle which once extended across this headland but little of it is now to be seen. According to  a recent curator of the Porthcurno Museum, Mr John Packer, the visual signal station pictured on the plate in the Truro Museum is almost certainly at Gwennap Head and the Union Flag shown flying dates it as pre 1801. Early maps of the area also show a station at Tol Pedn. In line with this there is in existence a photograph showing a two arm semaphore at Gwennap probably c1900-1910.

Work on the coastguard station began around 1905 and by 1910 it was up and running. Following the wreck of a small French fishing boat (the Vert Prairial) at the foot of the cliffs it was proved that the wreck site was invisible from the Gwennap Head look out which at that time was in the lower part of the present building. As a direct result of the wreck a second floor was added to give extra height to the lookout; this is our present watch room.

In the 1980's a tall wireless mast was erected on the headland. As well as H.F. and V.H.F. ship shore communications there was also a radio telemetry link which received weather reports from an automatic buoy stationed somewhere out in the Western Approaches beyond Wolf and Bishop Rocks

In the 1950-1960s there was a wooden 'mast' rigged on the grassy slope north west of the station - it was meant to represent the mast of a vessel in distress and used by the cliff rescue team for practising rescue by rocket and breeches buoy. It was removed because helicopters have supplanted rocket lines and also because there was concern that  visitors could harm themselves by climbing it.

By 1986 the days of the coastguards at Gwenap Head were numbered with Questions being raised in Parliament about the cost of running coastguard stations. The station was closed in 1994 and taken over by the N.C.I. in 1996.

NCI Gwennap Head was opened on October 21 1996 and we recently celebrated our 20th birthday. From small beginnings by a band of dedicated enthusiasts the station gradually took shape with equipement being begged, borrowed, or 'donated' from a variety of sources. The station achieved Declared Facility Status in 2000 after a thorough inspection by the Maritime & Coastguard Agency, which means that the station is 'fit for purpose'. Today we have over 40 volunteers, men and women of all ages, under Station Manager Ian Vinnicombe, who keep 365 watchdays a year helping to make our part of the coastline safer. 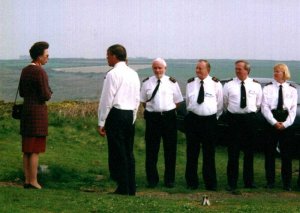 In 2003 we were  honoured by a visit by Her Royal Highness the Princess Anne who spent some time with us and thoroughly enjoyed her visit.