On the Jurassic Coast Path situated at the top of the cliff, to the south of the village of Worth Matravers, overlooking St Alban's Race, while to the west are Weymouth Bay and Kimmeridge Ledges, and to the east are Dancing Ledge and Anvil Point. 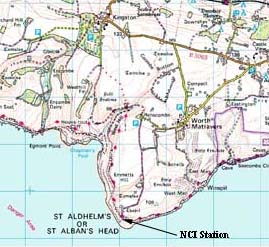 Originally there was a Coast Guard station and a further store built in 1895 at St Aldhelm’s Head (see ‘St Aldhelm’s or St Alban’s). More buildings constructed inland at Weston, Worth Matravers, in the 1950s. To this day the Weston buildings are still used by the auxiliary Coast Guard Cliff rescue team. The present building was constructed for HM Coastguard in the 1970s, and when the Coastguard service ceased to man visual lookouts in 1994, the building was returned to the landowners. The Encombe Estate. The Encombe Estate has leased the lookout to the National Coastwatch Institution.

The NCI facility was opened in May 1995, thanks to the efforts of Mr Graham Roff, and was manned by local volunteers, as a sub-station of NCI Peveril Point, Swanage. It became independent the following year, and achieved Declared Facility Status in December 2005. In 2006 an Awards for all grant was obtained from the National Lottery, this allowed for a major refurbishment of the buildings including the renewing and upgrading of some of the equipment in the station.

In 2012 the station was awarded the Queens award for Voluntary Service.

The station is located 335ft / 102 meters above sea level on the Jurassic Coast World Heritage site, between the major pleasure and commercial ports of Poole and Swanage to the east and Weymouth and Portland to the west. The horizon on a clear day is 22 nautical miles, with views to the Isle of White. Directly to the east is Anvil Point with its Lighthouse which produces a white flash every ten seconds. The coastline then sweeps westward, passing Dancing Ledge, and around in a bay to St Alban’s head. This area is a popular spot for Climbing in all its forms, Coasteering, kayaking, Diving and jet skis, as well as recreational sailors and commercial fishermen. The South West Coast Path runs right past the station and attracts many walkers, and runners.

Immediately below SAH is the notorious St Alban’s Race. Then to the West of the station, land sweeps past the Kimmeridge Ledges, through the military firing range area to Weymouth and on to Portland. On a clear day the Lighthouse at Portland Bill can be seen15 nautical miles away. SAH works closely with the Military firing range authorities. The range will inform the station daily of the firing arrangements for that day, and SAH will put up a red flag for them for them to warn seafarers that the range is active. SAH will announce this with in the morning and evening Channel 65 broadcast the station makes daily.

The area round SAH is a haven for wildlife and attracts many birdwatchers. Dolphins are regularly spotted out at sea and playing in the race.

What do we do?

Our prime purpose is to help ensure the safety of sailors, fishermen and others in small craft in the vicinity and to assist anyone using the coastal paths and cliffs who may need help. Any life threatening or dangerous situation, both at sea or on the coastal paths and cliffs, is notified to the Coastguard. In return they may task us to monitor any vessel or assist with an incident. We also supply information to the Coastguard or public on request. To assist us in our duties we have high powered optics, VHF radio, Radar and AIS. 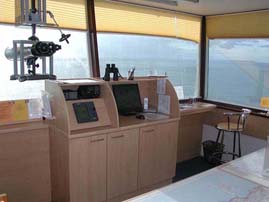 How can you help us?

You could join our friendly and professional team and become a qualified watchkeeper. No previous experience is required as full training is given. Males and females are both welcome.

You may prefer to help maintain the work done by the volunteers, if this is so, any financial donation, no matter how small, or other form of support would be welcome.