Calshot Spit is a one-mile long sand and shingle bank at the seaward end of Southampton Water. On the spit at its far end are Calshot Castle built by Henry VIII 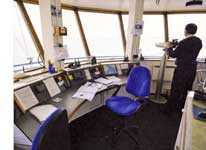 and now owned by English Heritage, The former RAF base now Calshot Activities Centre, the RNLI lifeboat station, and adjoining that the tower lookout occupied by Calshot NCI.

The tower is owned by ABP and was built in 1973 as part of the Southampton VTS radar chain. It served as a Coastguard lookout from1974 until the 1990s and was opened as an NCI station in July 2010.

The lookout viewing platform is approximately 100 feet above sea level and has a 360° view over Southampton Water and the Solent with a horizon distance of 11 nautical miles to the SE. In other directions the view extends to the shore line while the ESSO Oil Jetties partially obstruct the view of Southampton Water. A CCTV camera is used to view the inshore area which would be hidden by the Sunderland Hangar.

The port of Southampton is one of the country's busiest with constant commercial traffic which includes the world's largest cruise ships, container vessels and oil tankers, as well as regular car ferry and high-speed ferry services through the area.

Over 6500 major vessel movements were logged by our volunteer watchkeepers in 2011, 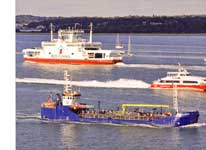 though the priority for watchkeepers is keeping a lookout for vulnerable craft and those at greatest risk.

The summer months also see intensive leisure use with the River Hamble and Cowes sailing centres in the immediate vicinity, with large numbers of recreational sailing events 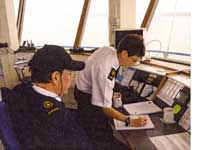 regularly scheduled. The activity centre and associated slipways are in constant use and it's normal for more than 200 leisure vessels to be within sight of the tower on a typical weekend day - and more like 2000 during Cowes Week and major racing events.

There are 38 permanent buoys and marks visible from the tower, and another two-dozen landmark points that would be used in specifying a location for SAR purposes, and to a large extent this supersedes traditional Lat and Long / bearing 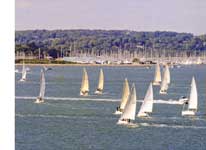 The station's area of responsibility extends as far as the watchkeepers can see. On a clear day this reaches to the Palmerston Forts at the eastern end of the Solent. Watchkeepers observe the waters and coastline visible from the tower, including the more immediate surroundings of Fawley and Calshot itself.