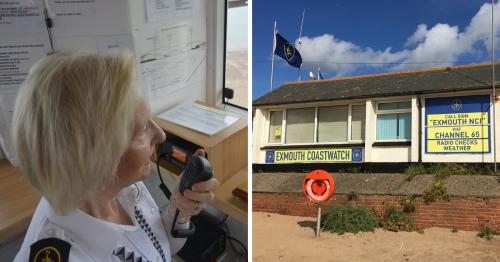 27th October 2020. Books, jigsaw puzzles, plants, cakes and even Christmas stocking fillers will be on sale from a garden wall in Exmouth on Saturday, October 31.

The charity sale, in aid of the National Coastwatch Institution station at Exmouth, is being organised by supporter Mary Hazlewood. Earlier this year, Mary raised almost £100 for the charity during the March Coronavirus lockdown by holding an ‘on-wall swapping’ event from her front garden, where she encouraged the borrowing and exchanging of books and jigsaws. She is inviting all to her latest fundraiser, taking place on Saturday, October 31, at Phillipps Avenue, in Exmouth.

Mary said: “During lockdown back in March, I began what I called ‘on-wall swapping’ across my front garden wall, from which people borrowed and swapped jigsaws and books. Many generous people offered donations in the honesty box and I managed to raise nearly £100 for Exmouth National Coastwatch Institution. Given the current difficulty they have in raising funds, I am going to run a garden sale on the same wall, offering books, jigsaws, plants, cakes and even Christmas stocking fillers.”. She added: “I thank those who so generously gave earlier in the year – and invite them to come along on Saturday 31st October, to Phillipps Avenue, and browse again.”

NCI Exmouth was founded in 1998 and is part of the region’s coordinated search-and-rescue capability. The station, in Queen’s Drive, is the fourth busiest in the UK, and has 70 volunteers, keeping a watch seven days a week.