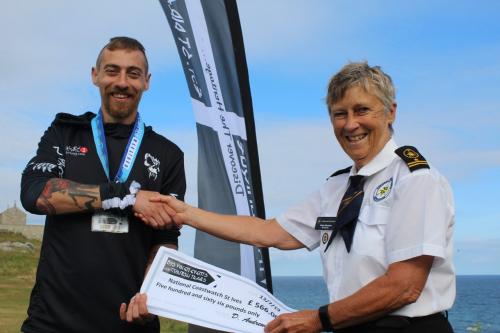 13th July 2019. Billed as "the world's smallest marathon", the 64 laps of The Island in St Ives has raised £566 for the National Coastwatch Institution station at St Ives.

The race was organised by David Andrewartha, of Bys Viken Events, who specialises in "quirky" marathons having previously staged them in unusual places including car parks, a prison exercise yard and on Southend Pier. He said: "We were delighted to support such a good cause as the NCI, having previously raised money for the National Trust and the South West Coastpath. We try to make our races different and The Island was a great place to hold a marathon with its difficult course."

Ten runners tackled the 64 laps of the 0.41-mile Island which meant 63 ascents of the steep hill and steps on the seaward side of the iconic landmark before the victory lap went anticlockwise. They included Dutch runner Wally van Laarhoven, who arranged a holiday in Cornwall to take part, and Sharon Sullivan, who "warmed up" by running the 19 miles from her home in Illogan to the start line after recently completing a 100-mile race in California.

NCI St Ives Station Manager Helen Simpson, who started the race, said: "We are extremely grateful to the organisers who donated the entire proceeds of the Island Marathon to the NCI."  Helen added "The NCI is always looking for anyone who would like to hold fund-raising events for us so we were delighted when David offered to stage the Island Marathon."

The sponsorship came about when David spoke to Helen and, learning that NCI St Ives was celebrating its 20-year anniversary this year along with the national 25th anniversary, said he would organise an event to mark the milestone.

St Ives NCI, which provides eyes along the coast 365 days a year from its lookout station on The Island to help ensure the safety of boat users, watersports enthusiasts, swimmers and coastal path walkers, would also welcome volunteers wanting to undertake the training to become a watchkeeper.