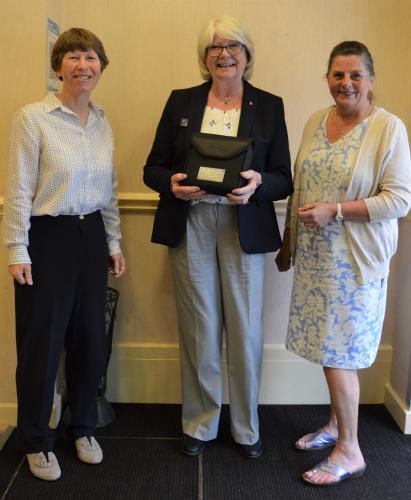 19th May 2021. Alan Richards served as NCI Chairman for five years during a critical stage of its development between 2011 and 2016. Alan stepped down as NCI Chairman in 2016 but continued to keep watch at Worms Head and assist with national projects until he sadly passed away in 2020.

His wife Teri and family wished to honour Alans memory with an annual award to a station or individual who have made an outstanding contribution to the NCI and this year saw the first recipient of the Alan Richards Memorial Award.

At this year’s AGM in Swindon, NCI Deputy Chairman Ian Whalley paid tribute to Alan with an emotional address “Alan Richards was NCI’s second chairman and his passing was a great loss to all of us in the charity. He was loved and respected by all for his leadership, his calm common sense, his good humour and his sage advice. His passing left a gap in NCI’s world and it’s fitting therefore, that he is remembered for all his good work. He is truly missed by his colleagues and we are indebted to Alan’s family for the provision of this award, and we are absolutely delighted to welcome Teri to our meeting today. The Board of Trustees considered long and hard as to which amongst all our excellent stations and watchkeepers should receive this award, and it was with some difficulty that we arrived at the name engraved on this plaque”.

After much discussion, the Board of Trustees decided that NCI Cromer would be the first recipient of the Alan Richards Memorial Award. The citation for the award states: “The NCI station at this site had been troubled for some years with an uncomfortable relationship with its neighbours. Watchkeepers struggled on for a while, but in spite of their valiant efforts the fabric of the building began to fail and watchkeeping became a chore and difficult. It was clear that the building was passed its sell by date and action to recover was clearly needed. The Board determined that this was a location too valuable to abandon, so they decided to secure the help and support of a neighbouring station. This strategy proved to be enormously successful but even with the practical assistance of the volunteers from that station, it was clear that the unit could not be economically saved, so plans were urgently developed to secure funding from local government and industry to replace it. In quick time a plan was devised to raise funds to replace the failed unit, recruit new watchkeepers, retrain the remaining watchkeepers, and form a new management team. Morale improved enormously and finally they gave it new name. The watchkeepers from the sister station then began to take a back seat and under the new committee, the station flourished and became the success that it is today. It is a worthy winner of this award, following as it does the principles of dedication, hard work and good humour that Alan held so dear”.

The award, a pair of Nikon 10 x 50 binoculars with engraved plaque, was accepted on behalf of NCI Cromer by NCI National Support Officer and former NCI Cromer Station Manager, Linda Lawrence. The photograph shows Linda receiving the award from Teri Richards while Lesley Suddes looks on.