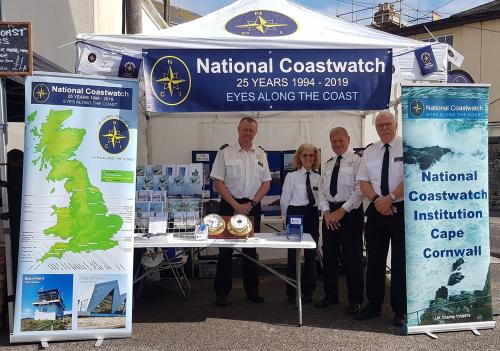 The Lafrowda festival takes place in St Just during July and culminates in a one day extravaganza with parades, stalls and live music. The volunteers from the National Coastwatch Institution station at Cape Cornwall, the most westerly NCI station in Britain, manned a stall in the middle of the activities to promote what they do, raise funds and attract new watchkeepers.

At the end of the day, the team had raised over £630 thanks to the generosity of the visitors at the festival. Not only was Cape Cornwall able to raise an incredible amount of money but they also made some good contacts for potential new watchkeepers and raised the NCI profile during the charity’s 25th Anniversary year.

The photograph shows some of the Cape Cornwall team at their stall before the festival opened.