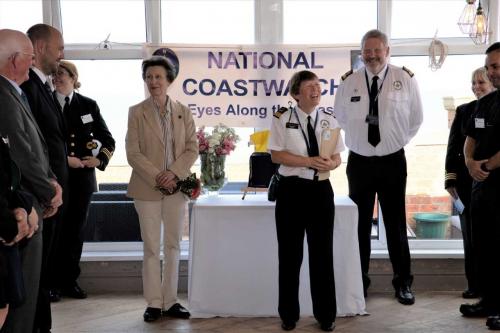 To show the importance of this new station, the team had to deal with two incidents on their opening day. Luckily they were supported by Clive Pouncey, the Deputy Station Manager from NCI Skegness, who was on hand to guide them.

Her Royal Highness was welcomed to the event, held at the station and later at The Marine Hotel, by The Vice Lord Lieutenant Mr Stephen Larade MBE who introduced, East Riding’s High Sheriff Mrs Deborah Rosenberg and Mayor of Hornsea The Revd Keith Himsworth. Her Royal Highness was escorted throughout her visit by Commander Lesley Suddes, RN, Chair of NCI, Mr Ian Whalley, NCI Trustee and Mr Malcolm Herring, Acting Station Manager of NCI Hornsea. Representatives from many local businesses and emergency services were also in attendance together with NCI support officers drawn from five different NCI stations. There were also displays in the car park of The Marine, from HM Coastguard officers from Hornsea’s Coastguard unit, Hornsea Inshore Rescue lifeboat and Butler Boats from Brough with two hand-built racing dinghies, A tent providing NCI information and tombola added to the event’s fun with music supplied by the Riverside Brass Ensemble. Staff of The Marine entertained guests to a Yorkshire Cream Tea, and Her Royal Highness spent some time chatting to all the guests and watchkeepers before unveiling a plaque to mark the station’s opening.

Born in Cornwall 24 years ago, following a local tragedy at sea, NCI started its operations in a disused lookout. There then followed steady development along the coast resulting recently in the leasing of the old Foreshores Office in Hornsea. This latest station will continue NCI’s aims to restore a visual watch around the coast and to extend its operations further north. Hornsea is its fifty-third station and is currently training new watchkeepers and installing equipment, enabled and supported by the generous help of local Hornsea business. NCI is a 100% volunteer operation and its 2500 fully trained watchkeepers come from all walks of life. In Hornsea, the swelling ranks of volunteers are drawn from the local community, and they are still recruiting. Perfectly positioned on the high esplanade, watchkeepers can see across 27 miles of coastline and far out to sea and with three lifeboat stations in its view, it is clearly in the right place to assist search and rescue agencies in promoting the safety of life at sea and maintain the NCI’s motto, “Eyes along the Coast”.