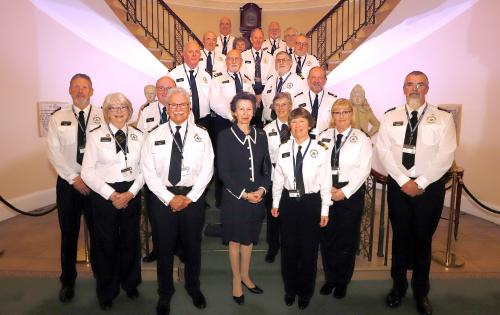 15th January 2020. NCI’s busy 25th Anniversary year was brought to a close with a reception in the presence of our royal patron, HRH The Princess Royal. The high-profile reception took place in the historic surroundings of Trinity House in London attended by a group of invited sponsors, supporters and guests.

Her Royal Highness was greeted by Lesley Suddes (Chairman), Ian Whalley (Deputy Chair), and Captain Ian MacNaught (Deputy Master Trinity House) before being introduced to the rest of the Trustees. The Princess Royal then moved on to the library where the guests had been entertained by the NCI Trustees and representatives from several stations who circulated amongst the guests enthusiastically explaining what our charity does and how they can support us. The North London Military Wives Choir provided musical entertainment with a lively performance.

Lesley Suddes welcomed Her Royal Highness and thanked her on behalf of the NCI for her ongoing support for the charity, before introducing The Princess Royal. Her Royal Highness addressed the guests, and thanked them for their support which has helped to underpin how far the NCI has come in our first quarter century. She demonstrated her excellent knowledge of NCI’s volunteers and their activities, outlining the need for an evidence-based expansion of NCI stations into vulnerable areas.  Her Royal Highness concluded by adding “NCI this is it – you’ll have to stop celebrating twenty-five years now and look forward to the next twenty-five”.

After a brief pause for a commemorative photograph, the NCI personnel continued to circulate amongst the guests who included representatives from The Yacht Market (who sponsored the reception), The Baltic Exchange, Lloyds Register, Seafarers UK, British Marine, UK Border Force, Seawork International, Sunsail, Icom and many others, as well as representatives from Trinity House, HM Coastguard and the Worshipful Company of Shipwrights. Deputy Chair Ian Whalley brought the reception to a close by thanking everyone for coming to the reception and showing their support for our charity.