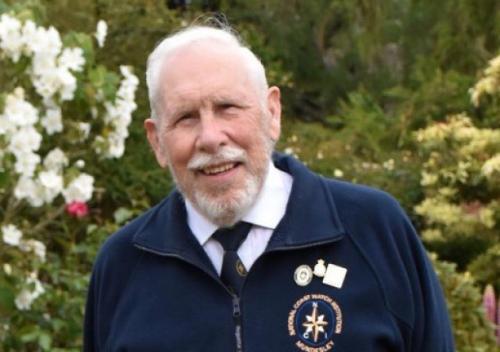 30th May 2020. The longest-serving watchkeeper at the National Coastwatch Institution station at Mundesley in Norfolk is stepping down after 25 years’ service.

Arthur Adcock has been with NCI Mundesley since it opened in 1995. NCI Mundesley was the second National Coastwatch Institution station in the country to open on May 19, 1995. Founder Richard May placed an advert for volunteers, and Mr Adcock took up his duties on June 1, 1995.

Mr Adcock said: “There have been many changes over the years. In the early days meetings took place at Richard’s house and there were only around eight watchkeepers. Equipment was sparse, just a compass rose, desk, pointer, telephone and an old valve radio that we listened to the weather forecast on”.

Mr Adcock had joined the RAF aged 15 and served for 40 years. He then worked on the MacMillan cancer ward at Peterborough Hospital, before his service with the National Coastwatch Institution. One of his proudest moments was when NCI Mundesley was the first station to receive the Queen’s Award for Voluntary Service.

Mr Adcock said: “It has been a privilege working with such a diverse and interesting group of people. I thank Richard May for setting the station up. I would also like to thank the station managers Ray Amo, John Carpenter, Bob White and, currently, Duncan Mackenzie.”

NCI Mundesley Station Manager said “Arthur has been a well-respected and active watchkeeper, always willing to offer his views based on his wealth of experience. The service is only what it is thanks to our early pioneers and our active volunteers, and Arthur is both.”

The Mundesley National Coastwatch Institution station is temporarily closed for the first time in its history due to the Coronavirus outbreak.