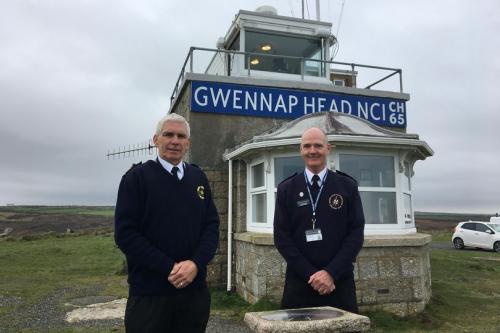 30th November 2020. “They work 365 days a year and help to respond to all sorts of emergencies. They're the eyes along the coast, working 365 days a year to keep you safe”. Cornwall Live recently visited NCI Gwennap Head, near Land’s End, one of the UK's most southerly watch stations to meet the volunteers and reported:

“It's a bleak afternoon in November with very few people around, however, Station Manager Ian Vinncombe says they overlook one of the busiest shipping lanes around. Only a few months ago the coast path was bustling with visitors hoping to experience Poldark's Cornwall. "They came up here twice and spent a few hours filming in front of us," Ian says as he points out the window further up the coast and  joked: "I watched Ross catch a coach from there to London.

Located between Land’s End and Porthcurno, Ian says the  station was built in 1905. However, after the coastguard closed the station in 1994, it was taken over by the National Coastwatch Institute (NCI) two years later and has been running ever since. Now the station is one of 56 around the country with more than 2,600 volunteers nationwide. Ian says the NCI is expanding at a rate of three Coastwatch stations a year and the station at Gwennap Head is one 13 in Cornwall open every day. He tells me there are 38 members who give their time to operate the Coastwatch station with volunteers aged between 50 and 92-years-old. He said: "Somebody has already volunteered to do Christmas Day. I don't have a problem getting volunteers to come forward. People just love doing it. I'd say 99 % of volunteers are local and live within a 10-mile radius," said Ian "But we have one watchkeeper who lives in Birmingham and comes to Cornwall once a month with his wife”.

Ian says the reason the Coastwatch station is here is to look out for people in distress. "Our ethos is spot, plot, and report, that's what every watchkeeper does. We're the eyes along the coast and we report to the coastguard, we are a recognised part of the search and rescue operation. If we weren't here, people's lives would be at risk from time to time", he adds. Ian tells me the NCI has participated in 534 search and rescue incidents so far this year.

Meanwhile, the coastwatch station is run at no cost to the public, and every penny is raised by volunteers and donations. According to Ian the Coastwatch station costs around £5,000 a year to run and they're always delighted to receive donations. Ian says: "In normal times I'm usually found shaking tins outside of Sainsbury's or Tesco. But sadly we're not allowed to do that this year."

If you would like to find out more about NCI Gwennap Head including how to volunteer, contact Ian on his email address [email protected] “