HIGHS AND LOWS FOR NCI PORTHDINLLAEN 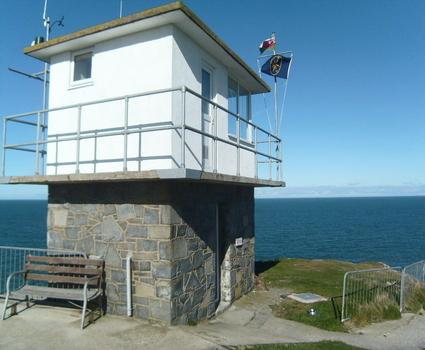 11th June 2019. The start of 2019 has seen a number of ‘ups and downs’ for the members of the National Coastwatch Institution station at Porthdinllaen.

Sadly one of the Watchkeepers, Cledwyn Davies, died suddenly in March. Watchkeeper Ray Waters said: “Cled was a well-known popular character in Pwllheli and the surrounding area; a fact that was brought home to us when we joined large congregations at his funeral ceremonies. Wearing our uniforms seemed to be a fitting tribute to someone whose practical, cheerful outlook will be greatly missed. We were also extremely grateful that Cled’s family donated part of the money collected ‘in lei of flowers’ to the NCI.”

With the good weather approaching, various watchkeepers have put a considerable amount of work preparing the watchtower for the ‘busy season’ at Porthdinllaen.

Ray said: “We are, of course, all volunteers and funded by public donation. Our main source of income is the two-day street collection we take up over Easter in Abersoch. The late Easter and beautiful weather meant that the residents and visitors were out in force; and we were delighted to collect over £1,000. An additional boost to our finances will come from being chosen to benefit from Asda Pwllheli’s Local Community Project Scheme, for which we thank them.”

On the social side; one of the watchkeepers, Christine Harris, has become Ladies Captain of the Nefyn and District Golf Club and at an Afternoon High Tea Event at the Golf Club, Jenny Wilson, the fundraising manager, explained to everyone exactly what the NCI’s role is in the tower right at the far end of the golf course. Jenny gave examples of incidents when we have been able to help sailors and walkers and stressed the fact that we would dearly like to extend the duration of our daily watchkeeping service if we could recruit more watchkeepers.

The annual assessment of the station which is due ensures the team is competent to continue to work with Her Majesty’s Coastguard, The RNLI, Wales Air Ambulance and other emergency services, in a Search and Rescue situation. Part of this assessment is conducting a training exercise with the Portdinllaen Station of the RNLI. So, on 5 May the lifeboat was launched and headed out to sea to set adrift three practice targets, which were to be recovered using directions radioed to them by two Watchkeepers in the NCI tower. The targets were the RNLI’s own Y-class inflatable lifeboat, a six stone dummy, and a large black fender. Once the Tamar class lifeboat had returned to the vicinity of Portdinllaen, the two watchkeepers successfully guided it to do a series of ‘rescues’ of the drifting targets. NCI Portdinllaen is extremely grateful to the RNLI for their help and co-operation.