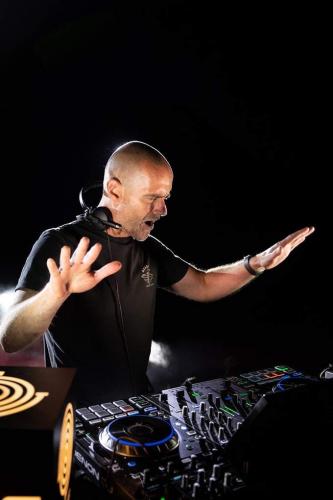 25th December 2021. With the support of the National Trust and the National Coastwatch Institution, electronic DJ John 00 Fleming, and Totnes-based dance label Goldswindler curated and performed a show that was filmed and produced by Defacto Films, on an abandoned WW2 emplacement near the NCI station at Froward Point.

The 90-minute set was filmed in September and consisted of ambient, progressive house and trance music which was broadcast to a global audience on Christmas Eve as a free concert.

Rusty Goldsacks, from Goldswindler said “Over the lockdown we decided to film a beautiful electronic music set in partnership with various local creatives, with the aim of giving viewers a moment to reflect on their personal circumstances during lockdown. We did this for the love of music and for fans who would like to see something unique and hear something special, given the constraints placed on all of us over the past 18 months. The show is a powerful demonstration of what’s possible when people come together with a common intention, to give all who watch it a moment to reflect on the circumstances they have faced throughout this most challenging period in recent memory, and to enjoy the healing power of music in nature.”

Writing to fans on his Facebook page, DJ Fleming said it has been a “testing year for everyone so I got together with my good friend, Goldswindler, to record you something magical at a very special location, with drones etc, and wanted to give you this as a Christmas gift. It’s a YouTube premier that will go live at 22:00 (UK time) on 24th December and lasts for 90 minutes.

Although it was a free event, audiences were urged to make a donation to the National Coastwatch Institution, which has a watch station at the clifftop site. Rusty urged: “If you would like to show any appreciation for this show, please feel free to support the National Coastwatch Institute. It is run by the most inspiring community of retired volunteers who have tirelessly kept watch over all who have found solace, peace and much needed mind space in the vastness of the ocean or by walking along the cliffs; where we were permitted the rare opportunity to film this for you during lockdown.”

The photograph (courtesy of Defacto Films) shows DJ John 00 Fleming during his set.