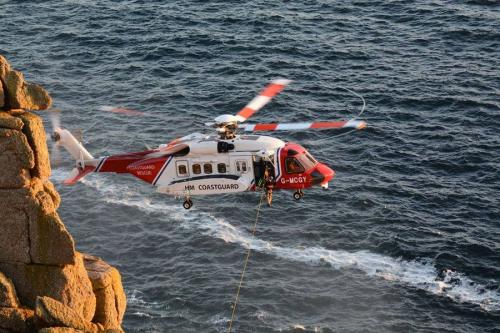 8th September 2020.NCI Gwennap Head have had a busy day today, including a modern version of “Can We Have Our Ball Back, Please”! A spokesperson from the National Coastwatch Institution station at Gwennap Head in Cornwall submitted the following report:

“Our watchkeeper had an ‘interesting’ afternoon watch, yesterday! A large group of climbers were climbing various routes on the Chair Ladder - the sea cliff in front of the watch - which, I’m told, is "one of Cornwall's and indeed the UK's, premier crags" (don't ask me...I get a nose bleed just standing on a step ladder!). They were also using a drone to get aerial shots of their daring-do and, at one-point, lost control of it, resulting in a crash landing on the back roof of our watch room, followed by a rather shame-faced “Can we have our drone back, please?” Naturally, our watchkeeper was happy to oblige, albeit with suggestive glances at our donations box (as a local charity, we’re totally funded by the public and, in common with many other charities, the lockdown has hit us hard).

However, half an hour before the end of the afternoon watch, things took a much more serious turn when one of the climbers injured themselves after slipping and falling from a route. A 999 call was made from our landline (mobile reception is dodgy, here) and a major rescue operation was launched, with Coastguard rescue teams from Penzance and Land’s End, both Sennen lifeboats and the Coastguard Search-and-Rescue helicopter, being mobilised. Eventually, the casualty was winched up and airlifted to hospital and our watchkeeper was able to finish his shift...2 hours after the watch should have closed....as in all NCI stations, no one clock-watches when an incident is ongoing!”

A great job by all involved.